Following the 2020 budget, we’ve summarised the key changes highlighted by the Chancellor.

The chancellor has confirmed the government’s commitment to increase the thresholds at which employees and the self-employed start paying National Insurance contributions with the eventual goal being to bring these in line with the income tax personal allowance.

It is reported that a typical employee will save £450 per year due to this increase.

No changes were announced to the planned income tax rates from April 2020 with them remaining as:

No changes were announced to the planned hourly rates effective from 1 April 2020 below:

In response to the recent Coronavirus outbreak the chancellor has announced that the government will refund all SSP paid by small and medium-sized employers this includes SSP paid to those who choose to self-isolate. The eligibility criteria for the scheme are as follows:

The flat-rate deduction for homeworking is a simplification measure for employees to claim costs of working from home. The chancellor has announced that from April 2020 this will increase from £4 per week to £6 per week.

The chancellor has confirmed that all Benefit in Kind (BiK) rates for company cars will be reduced by 2% from April 2020 as a temporary measure increasing by 1% in each of the following years. In addition to this the BiK rate for zero emission vans will be nil from April 2021. The rates for new cars bought on or after April 2020 are as follows: 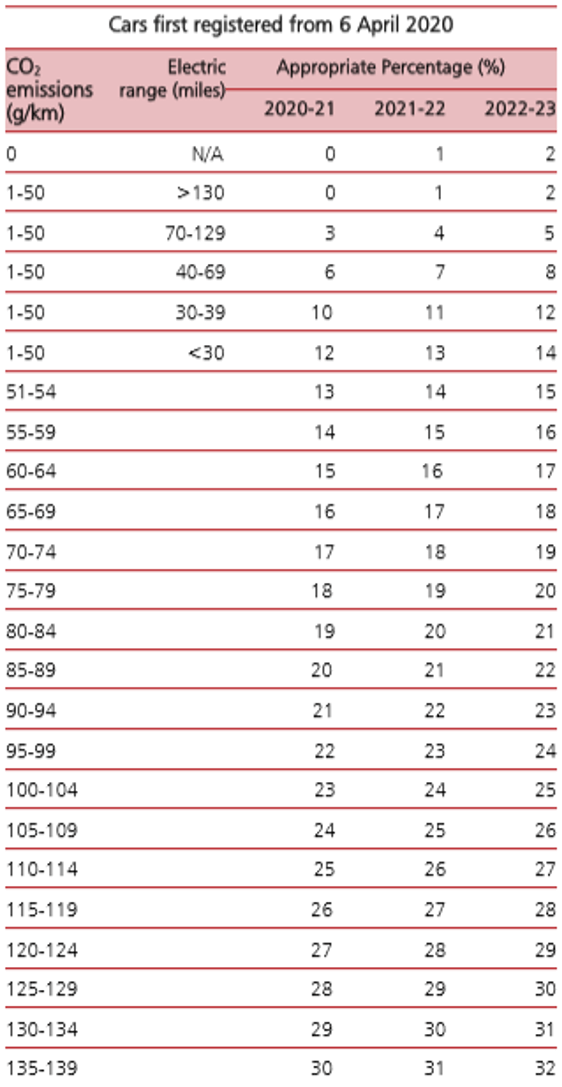 The lifetime allowance for pension contributions will rise to £1,073,100 from April 2020, this is in line with inflation and as expected with no changes being announced in the 2020 budget.

The chancellor has confirmed however, that the tapered annual allowance threshold for pensions will be increased. This is said to be because of the disincentive it provided to senior doctors from working additional hours. The annual allowance remains at £40,000 and is tapered for higher earners earning above a certain amount. There are two thresholds in place and from April 2020 both will be increased by £90,000. ‘Threshold income’ will be increased to £200,000 and ‘adjusted income’ to £240,000. Further, it has been confirmed that the minimum tapered level will reduce from £10,000 to £4,000.

A number of key changes were already planned for CGT coming in to effect in April 2020. The chancellor in his budget made one further announcement with a change to Entrepreneurs Relief as a result of a recent government review. A summary of the changes:

The chancellor explained that evidence suggests that the relief has done little to incentivise entrepreneurial activity and that most of the benefit accrues to a small number of very affluent taxpayers. The reduced rate payable on qualifying gains remains at 10% however the lifetime limit on gains eligible for Entrepreneurs’ Relief will be reduced from £10 million to £1 million.

Previously this relief applied to gains made on properties that at some point were let out to tenants and were at any point the individual’s principal private residence. This will no longer be the case, any qualifying period of letting will only be allowable as to any periods where tenant and landlord shared occupation of the property.

Previously relief was given for the last 18 months of ownership of a property as a proportion of the gain made, that at any time was the individual’s principal private residence. This period will be reduced to 9 months.

Under the current system of self-assessment any taxable gain made is reported on an individual’s self-assessment tax return due to HMRC by 31 January each year. From April 2020 all taxable gains arising from the sale of residential property will need to be reported to HMRC within 30 days of the sale, in addition to the end of year tax return.

No mention was made of the rates of CGT in the budget which will remain as they are:

The chancellor announced that the government will introduce a 2% SDLT surcharge on non-UK residents purchasing residential property in England and Northern Ireland from 1 April 2021. This is aimed to control house prices and it is claimed that any monies raised will be used to tackle homelessness.

Whilst no changes were announced to Corporation Tax with the rate remaining at 19%, it was confirmed that as per the 2018 budget from April 2020 the proportion of annual capital gains that can be relieved by brought-forward capital losses to 50%. A number of changes were however announced to capital allowances and reliefs.

From April 2020 the annual rate of capital allowances available for qualifying investments to construct new, or renovate old, non-residential structures and buildings will increase from 2% to 3%.

The rate of Research and Development Expenditure Credit will increase from 12% to 13% from April 2020, with the PAYE cap for SMEs to be delayed to April 2021.

The chancellor has confirmed that the government review in to IR35 has concluded and no further changes will be made. Changes made as a result of the review:

The 2020 budget avoided the issue of inheritance tax altogether. However the residence nil rate band will increase as planned to £175,000 (applicable if the main residence is passed on) with the IHT nil rate band remaining at £325,000.

The government will increase the Employment Allowance available to employers from £3,000 to £4,000 from April 2020. Eligibility for the allowance will not change.

From December 2020 the rate of VAT for electronic publications will be reduced to zero and from January 2021 the so called ‘tampon tax’ will be abolished such that all women’s sanitary products are zero-rated.

The chancellor has announced that any business eligible for either Small Business Rate Relief (SBRR) or Rural Rate Relief will be entitled to claim a £3,000 grant. Details of this are yet to be released. To qualify for SBRR your property’s rateable value should be less than £15,000.

The chancellor announced that the temporary increase in Business Rates retail discount planned for 2020-21 will now be 100% rather than the planned 50%. This is claimed to be in response to the likely impact Coronavirus will have. The relief will also be expanded to the leisure and hospitality sectors and will continue to apply to those properties with a rateable value of less than £51,000.

Hello.
Tell us a bit about your business.